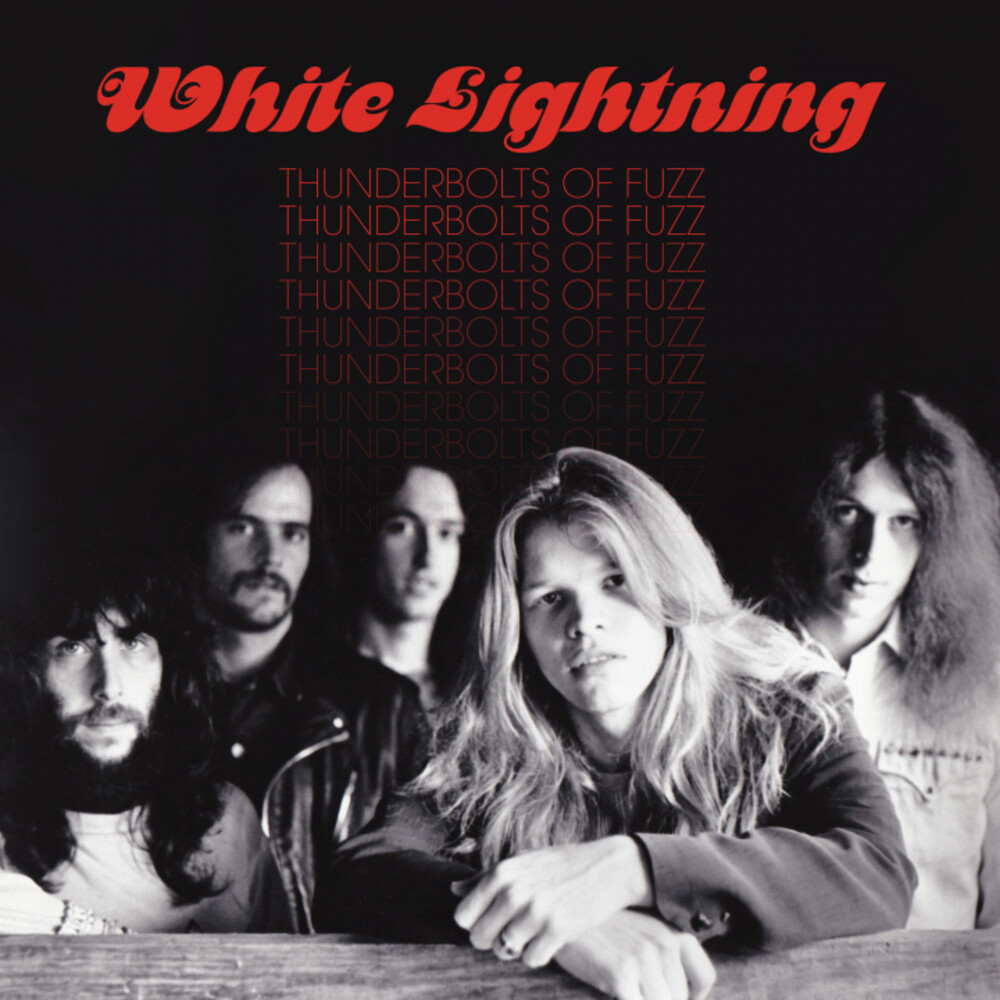 Standout favorites of RidingEasy Records' Brown Acid compilation series, White Lightning's stellar discography of rare and under-appreciated heavy psych, proto-metal rock gets a vital revival for new generations to learn how swinging, swaggering and often blazingly fast rock'n'roll is done. White Lightning was formed in Minneapolis, MN in 1968 by guitarist Tom "Zippy" Caplan and bassist Woody Woodrich after leaving garage psych band The Litter (themselves popular standouts from the Nuggets and Pebbles series of garage rock rarities. ) Originally a power trio, the band later expanded to a 5-piece in 1969 while shortening it's name to Lightning. The quintet's brilliant and rare 1970 self-titled album on Pickwick International's P. I. P. imprint provides 6 of the 10 tracks on hunderbolts of Fuzz. The original White Lightning trio only released one 45-rpm single "Of Paupers and Poets" during their existence (on local Hexagon label in 1968, later reissued by major label ATCO Records in 1969. ) A long out-of-print posthumous album released in 1995 gathered unreleased recordings, 3 of which are found here. This rounds out this collection of recorded highlights from the band's rocky history. Taking their name from a particularly potent type of LSD, White Lightning laid out from the start that it was not cute and cuddly 70s rock. In fact, the band's aggressive tempos are like punk rock way before punk. However, their dirty blues groove and musical prowess shows the band was more than unrefined ne'er-do-wells, they had true versatility. Drummer/lead vocalist Mick Stanhope later relinquished his drum throne to take center stage as lead singer of the expanded lineup. Hroughout it's initial 1968-1974 run, the band had 10 different lineups, with Caplan, Woodrich and Stanhope the most consistent members - though the band points out that no one member has played in all 11 incarnations of the group. Album opener "Prelude to Opus IV" is a wailing rocker with blazing double-kick drum, sizzling melodic riffs and Jim Dandy howls jam packed into an epic 4 minutes that serves enough testament to the band's greatness, nothing more need be heard or said. However, the would-be hits keep coming as the Led Zeppelin meets Black Oak Arkansas thwack of "Hideaway" and "Born Too Rich" come screaming out of the speakers. "When A Man Could Be Free" shows the band could also reign in the fury, at least a little bit, for a warm Southern rock style ballad. Borrowed and Blue" echoes the stately poetry of Electric Ladyland-era Hendrix with a dash of The Who's rollicking psychedelia. "1930" is, quite simply, insane. Searing twin guitars with incredible fuzz-drenched tone, a warm and buzzing bass line bounce atop drummer Bernie Pershey's unrelenting bass drum triplets while Stanhope ravages his lungs with soulful abandon. The album closes with the aptly titled "Before My Time" a barnstorming boogie rock instrumental the proves the band vanished long before receiving their due.
This website uses cookies to personalize content and analyse traffic in order to offer you a better experience.
I accept Learn More
back to top